The William Gibson quotation, “The future is already here—it’s just not very evenly distributed,” came to mind when I photographed this rusty shed/barn and the moon (where humans have walked) in a single shot together. 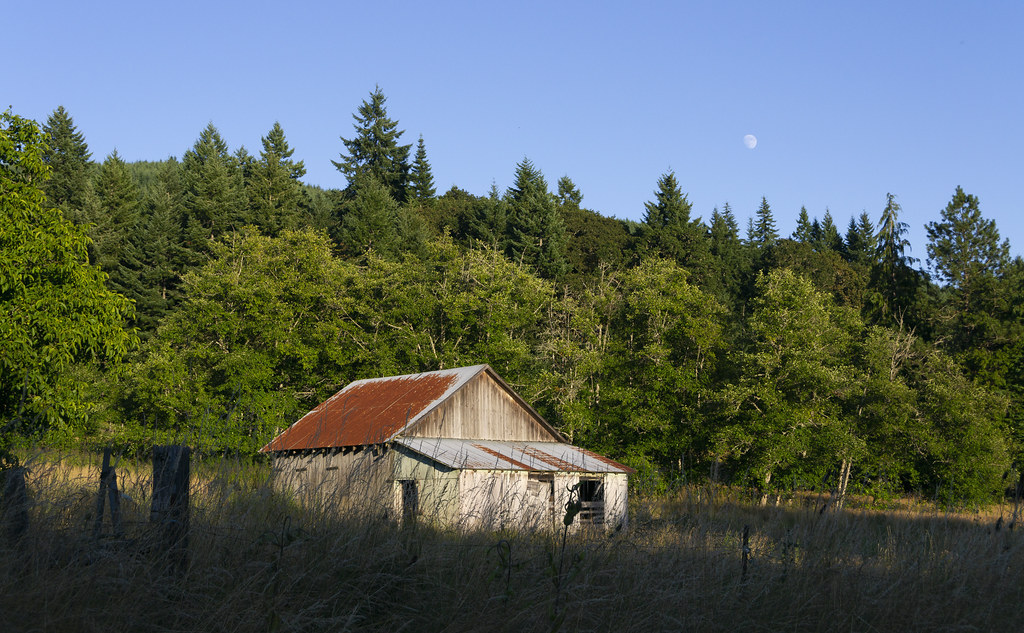 Returning to Trinity College’s campus for reunion this summer, I felt a little like I was sneaking around in a place I didn’t quite belong. The moon, hiding just behind the chapel’s steeple, seemed to share my bashfulness. 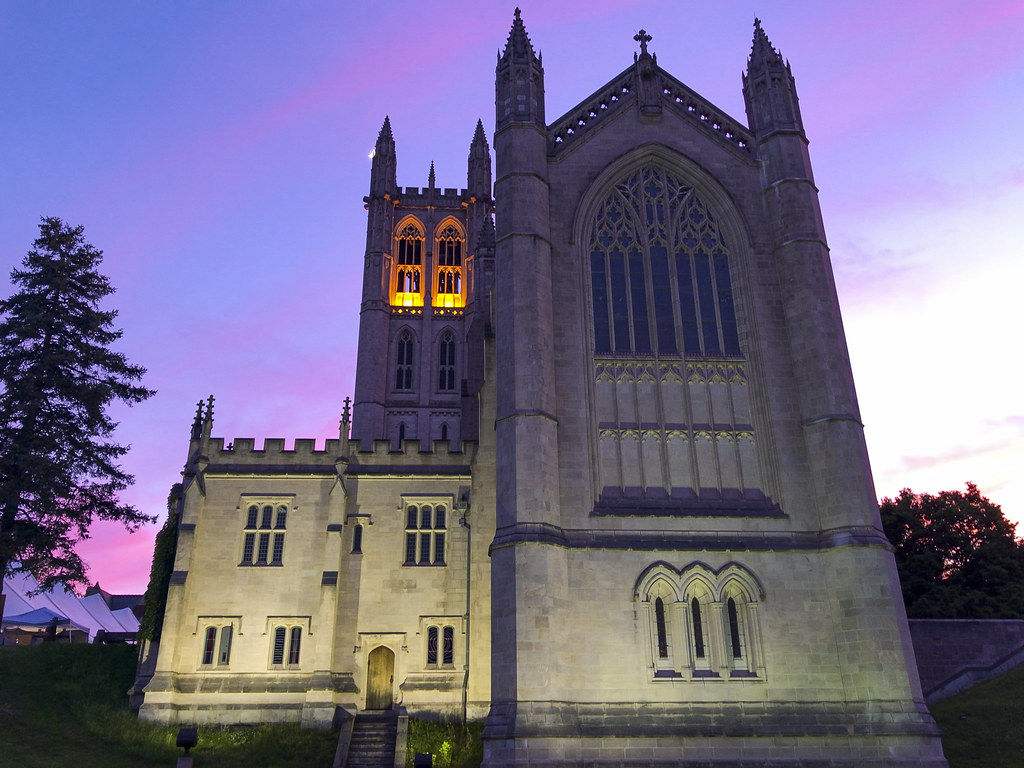 I wonder if the people that live on these houseboats feel like MacGyver. 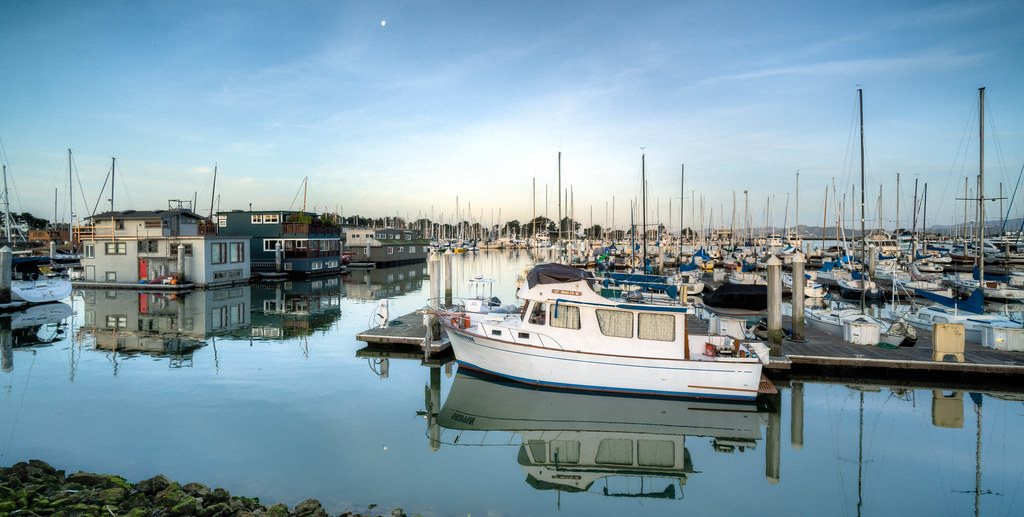 I just thought the clouds in the sky looked super appealing last night. 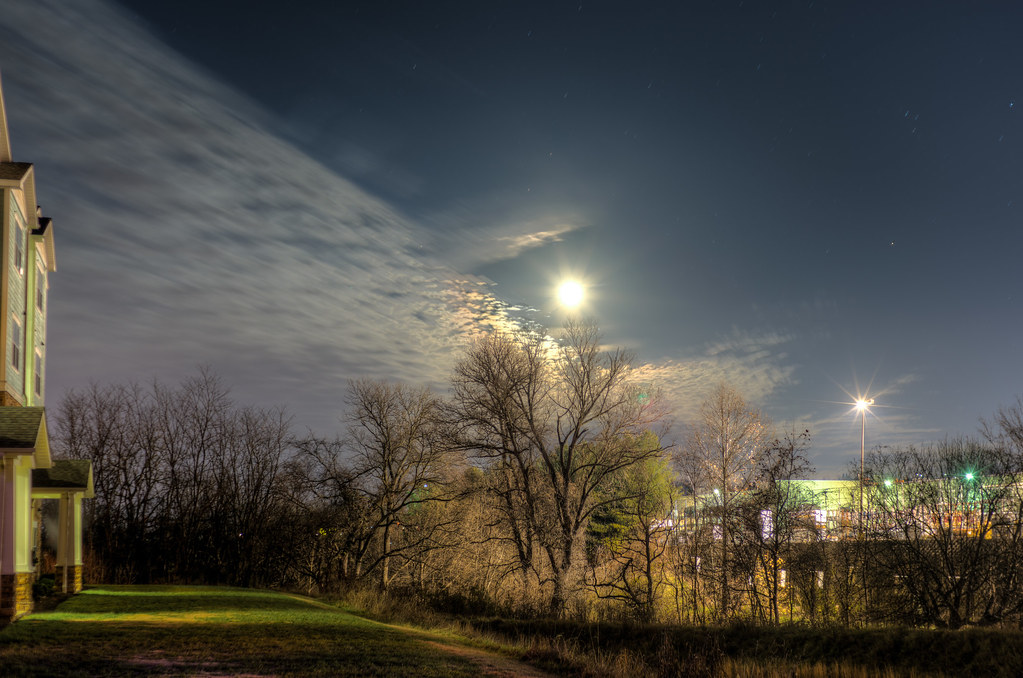 The rise of an almost-full moon, framed between branches. Autumn arrives early in the North Country. 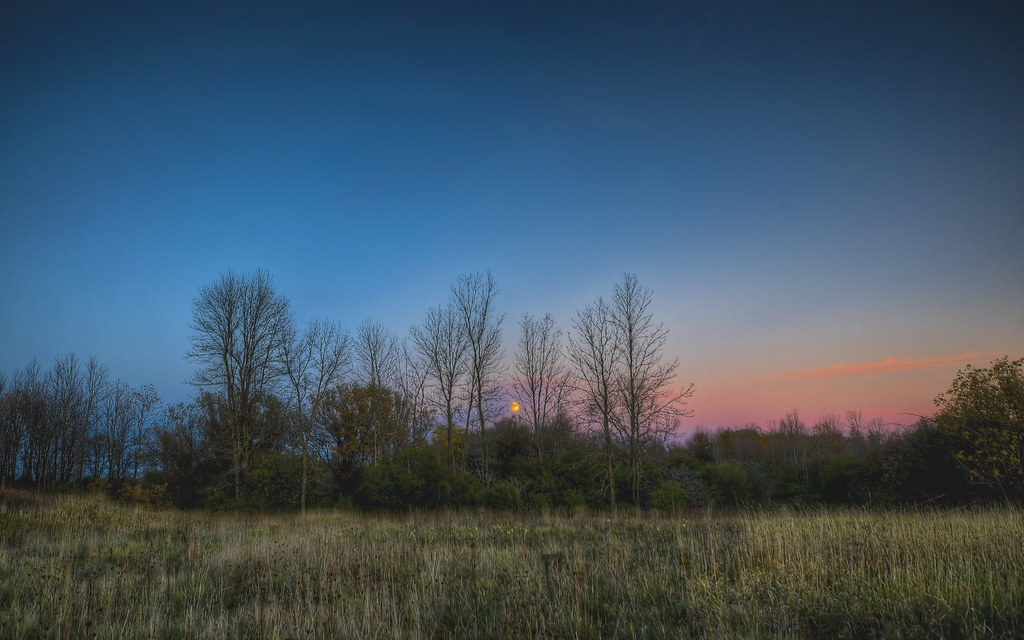 The weekend marked a Hunter’s supermoon—one that also coincided with the moon rising along the axis of Main Street in Canton, New York, as well as coinciding with the local period of peak foliage. Can one small town handle all of those events? My quadcopter and I were on hand to investigate. From 100 meters up, Main Street looked just about perfect. You can spot the awning of the Chinese restaurant and the movie theater that I’ve photographed previously, but the same structures take new meanings. 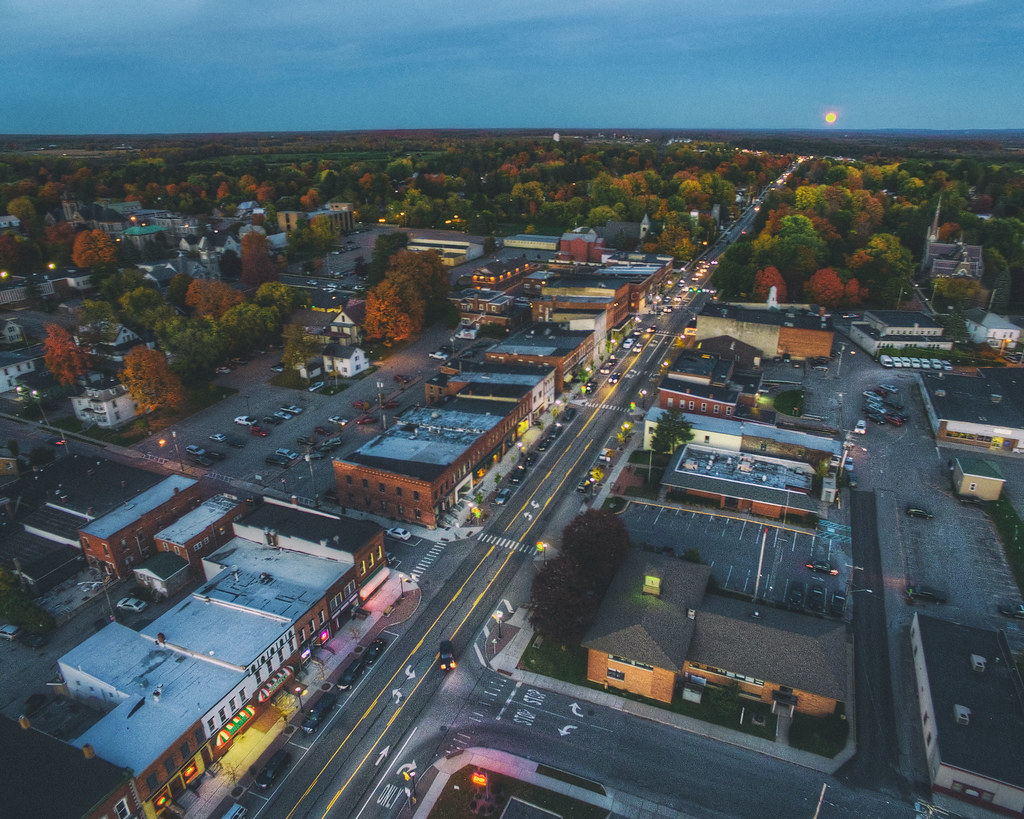 From my hotel room window, on a beautiful Sunday morning.

Stark winter nights, the kind with a handful of clouds and a lot of bright stars, seem to be when I spend the most time shoveling my driveway. Might as well do a long exposure or two while I work, right? I particularly like the tree in the center of the image that has been completely lit by the adjacent streetlight: it seems otherworldly and special when compared to the other silhouetted trees. 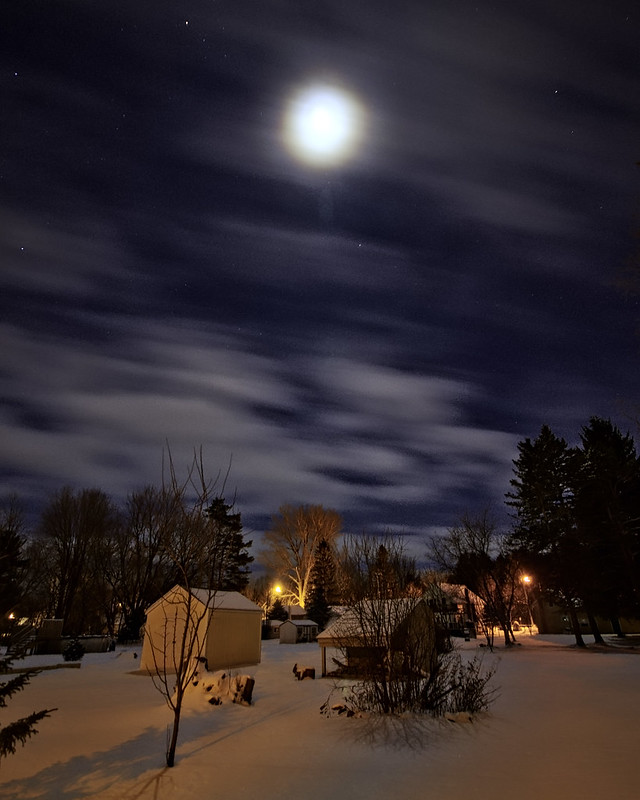 This weekend’s inescapable event was the once-in-a-decade super blood moon, a simultaneous lunar eclipse and supermoon. I snuck away from working to get a shot of the moonrise over the campus and the Adirondacks. 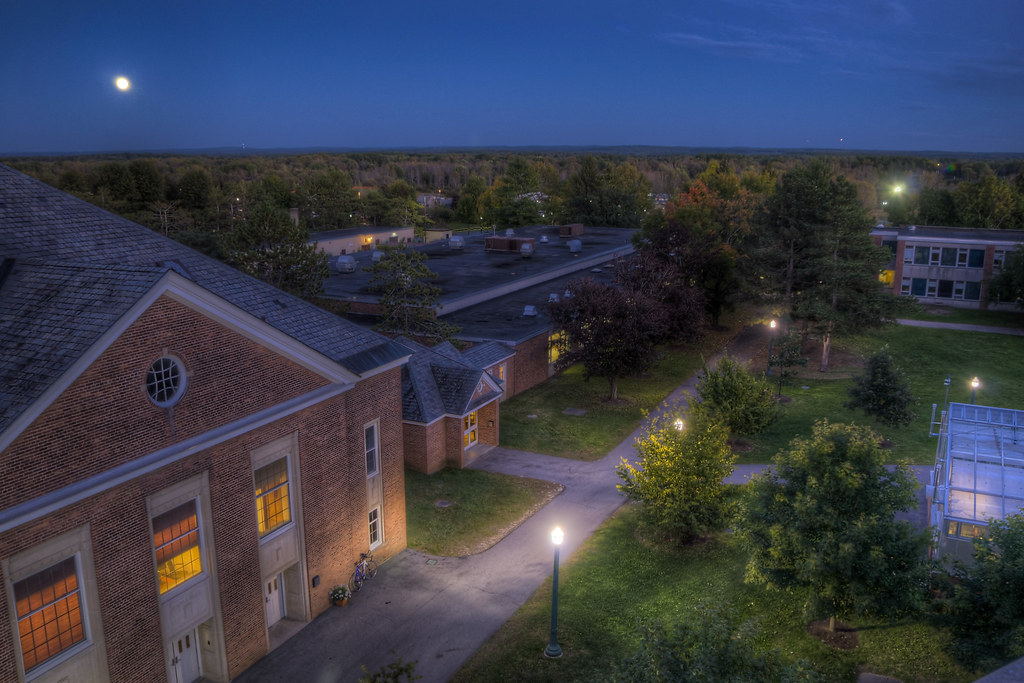 Later in the evening, the lunar eclipse was in full swing and I shot it as it passed the newly restored steeple of the campus chapel. 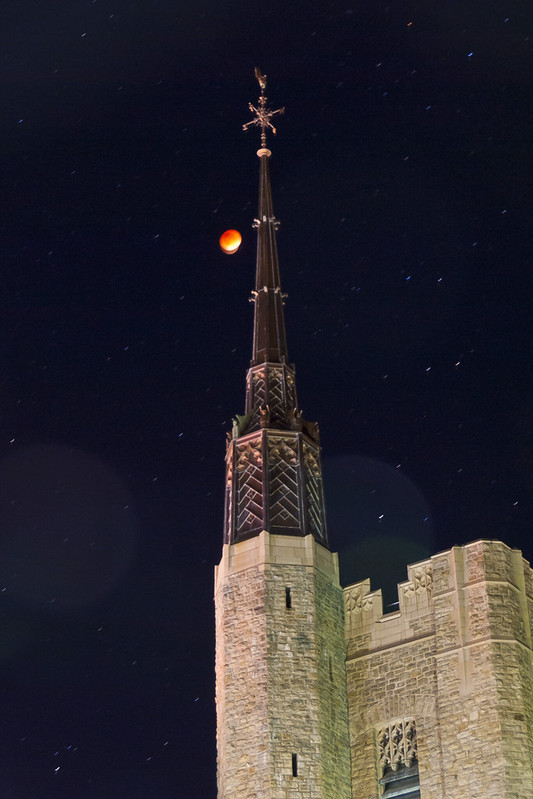 The last supermoon of the summer (such as it is) was hovering over the Adirondacks and over St. Lawrence’s sylvan campus. The interplay with the science buildings seemed appropriate. 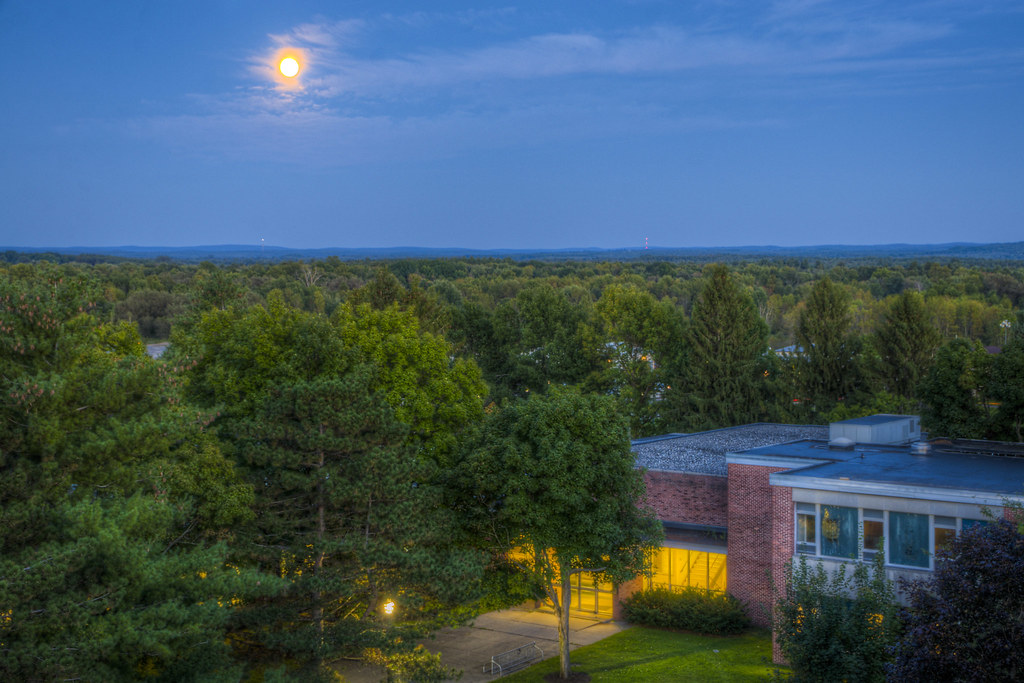 Even better, though, was the alignment of the moon directly over the tiny tower in the Adirondacks (cell, I’m guessing?). Maybe it’s innocuous, or maybe it’s part of a plan by a mad scientist to finally control the Moon! 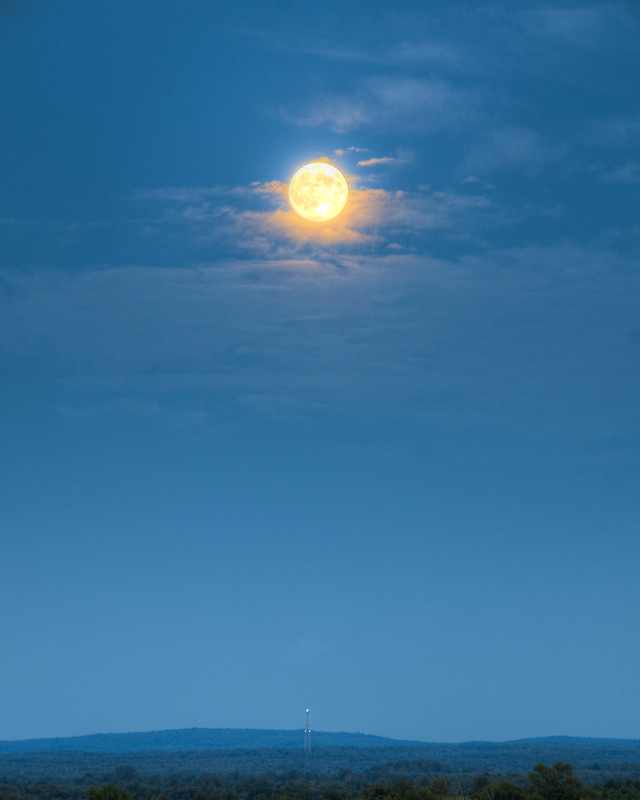 There’s something about the lighting and the way it plays off the curved hand rail that reminds me of a dystopian future in one of Neal Stephenson’s novels or of disembarking from a futuristic space port.

San Francisco’s waterfront is really pretty spectacular at night. There’s so much color.

Back to lovely, bucolic central Oregon. Something about an active field, with the pines and the farmhouse in the distance, mixes with the moon above to convey a sense of “a hard day’s work.” If it were a painting, I’d call it “Western Art.”

One of things I remember most about growing up where I did was the view of the moon’s light reflecting off of Puget Sound. On particularly calm and clear nights the moon’s reflection will be particularly clear, almost like there are two moons. It was a little cloudy on this particular night but it was still a spectacular sight; it almost looks like a painting.