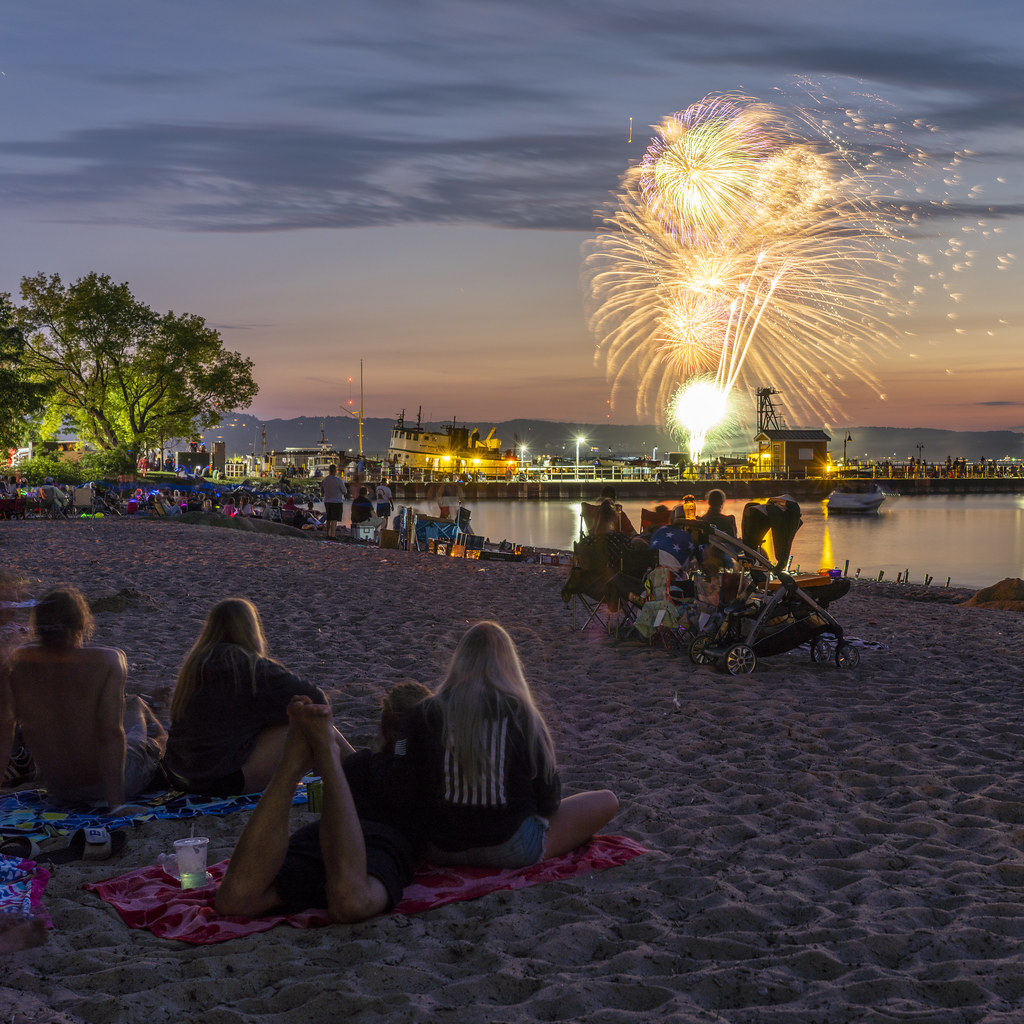 The enormous Margaux Farm seems, like some equestrian Jurassic Park, to stretch from one horizon to the other. 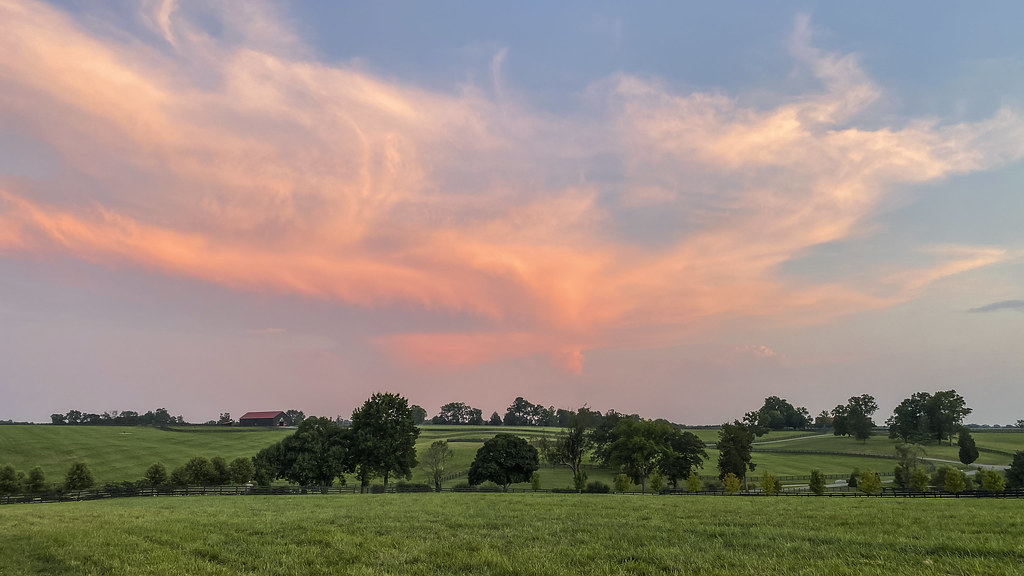 It’s a cliché of landscape photography that the huge scale of a landscape can best be conveyed be including a human. Though there is indeed a person in this picture, I think Laurel Falls needs no help. Perhaps that’s because of trail experience to reach it. 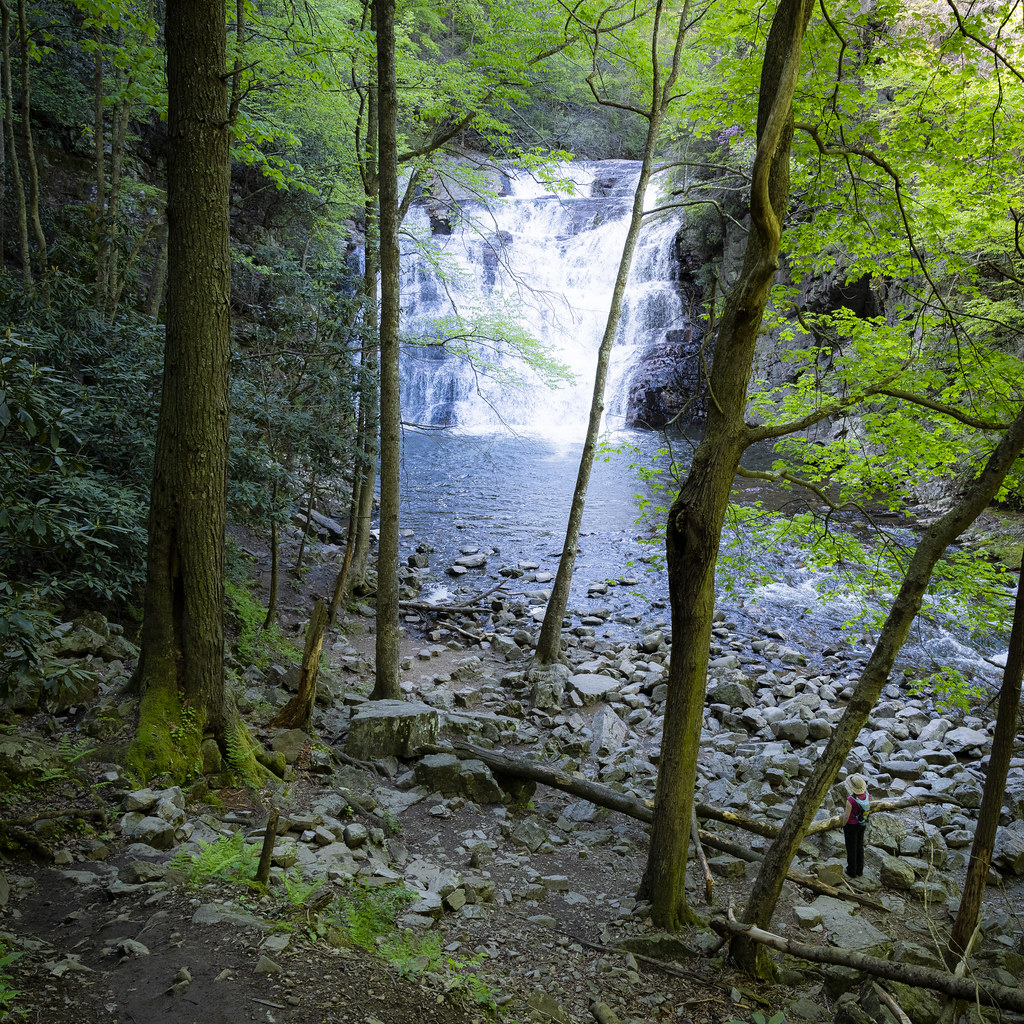 While a telephoto view of fireworks and people can place the pair on even scale, the opposite—a wide-angle view that places the aforementioned pair in context—makes apparent just how small they are on the scale of the Earth. 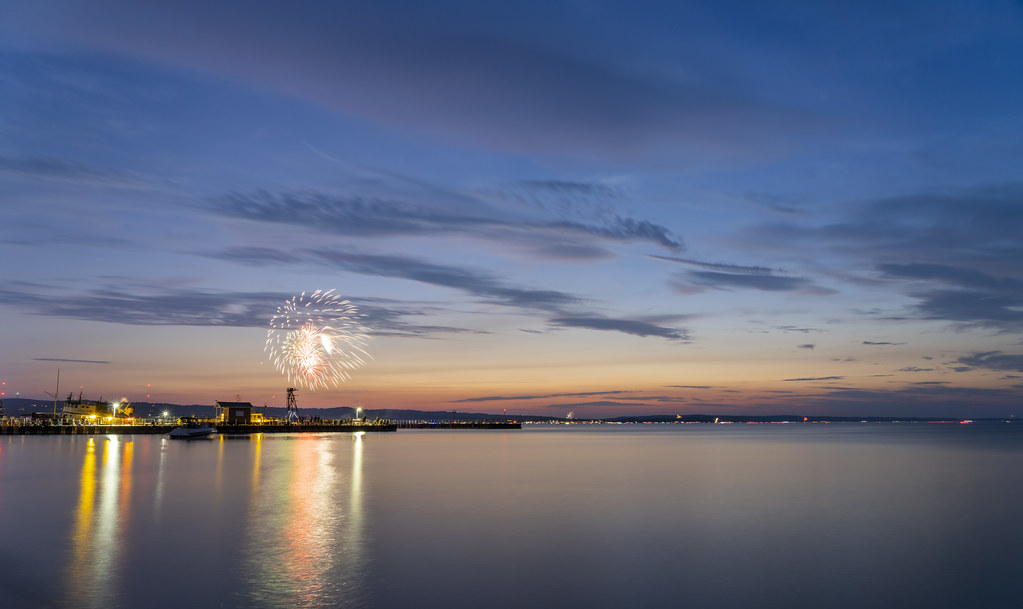 Roots draped elegantly over rocks beside a burbling brook create the more-naturally-occurring equivalent of a Japanese garden. 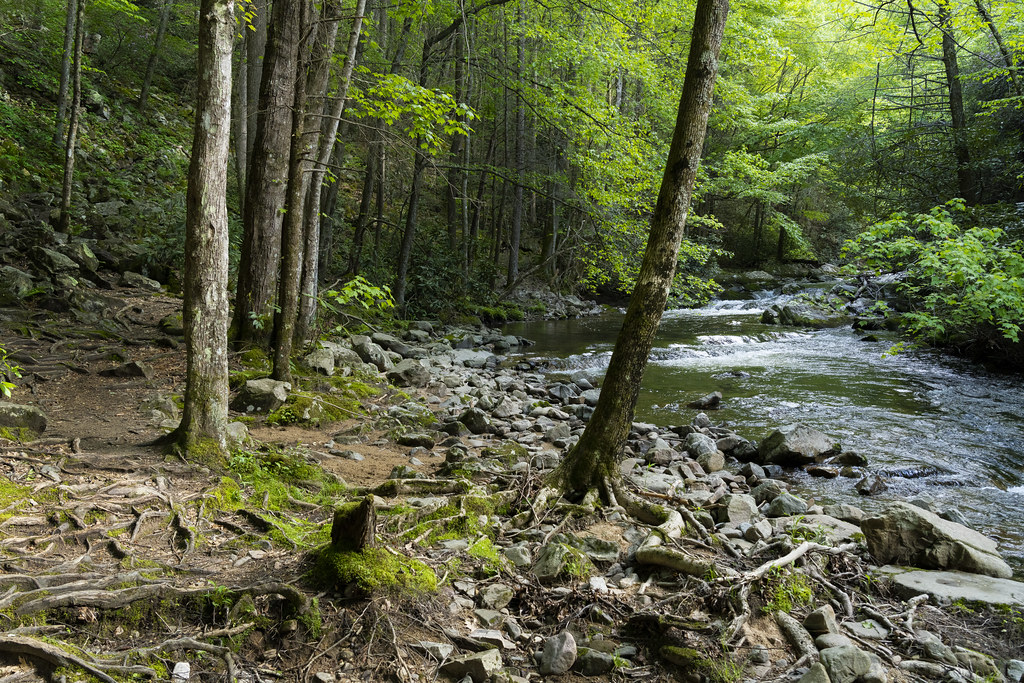 Fireworks above the Grand Traverse Bay, as viewed from the piers. The true scale of fireworks becomes apparent when a long lens positions the explosions and the people closer together. 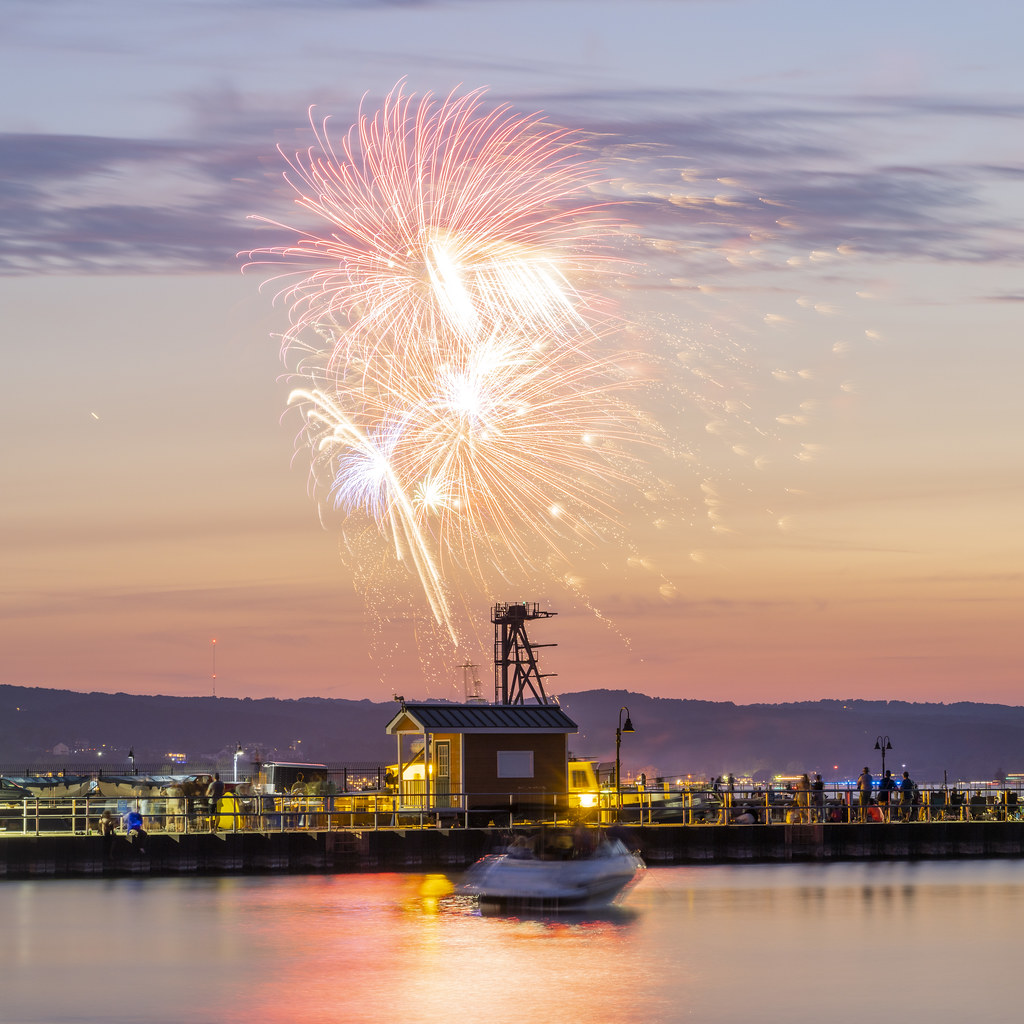 While my normal images capturing the “civilization gradient” tend to be more focused on space (traversing from nature to dense urban areas), I sort of like the way this image reminds me of a traversal through time, from the Stone Age to the Information Age. As William Gibson says, “The future has already arrived—it’s just not very evenly distributed.”

Or perhaps it really just reminds me of the vantage point from Caspar David Friedrich’s “Wanderer above the Sea of Fog“. 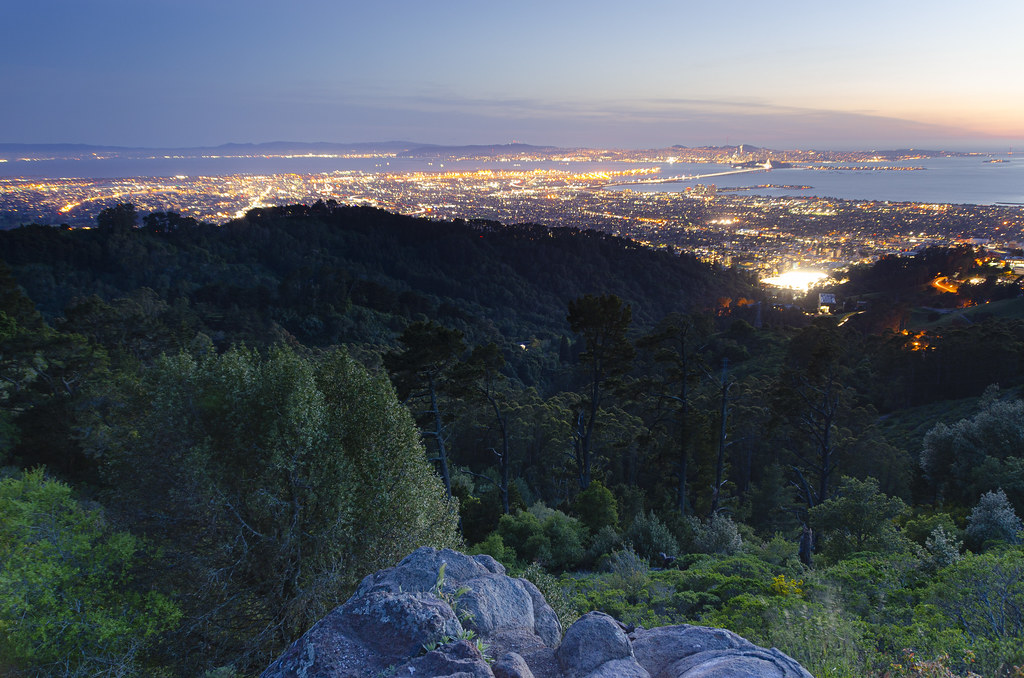 When hikers choose the trail this close to the river’s edge, they’re betting on the water level—will it be sloshing over the rocks and requiring a long detour? On this day, the hikers lucked out. 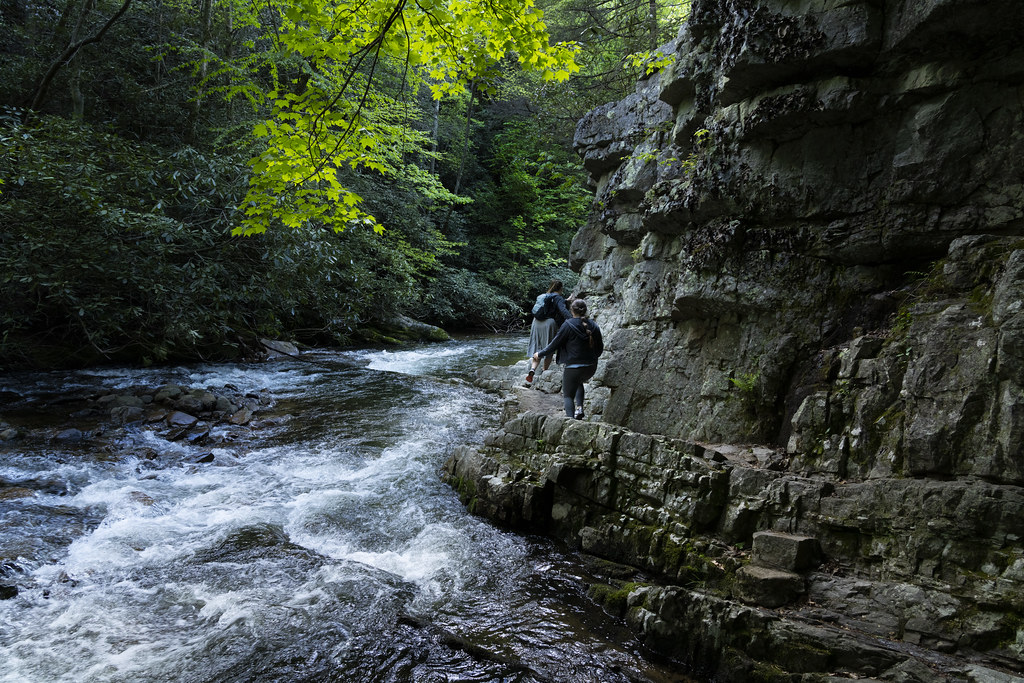 The school year has started and now summer travels are memories. The fuzzy, insubstantial people of this long-exposure photograph kind of match the feeling of fading reminiscences. 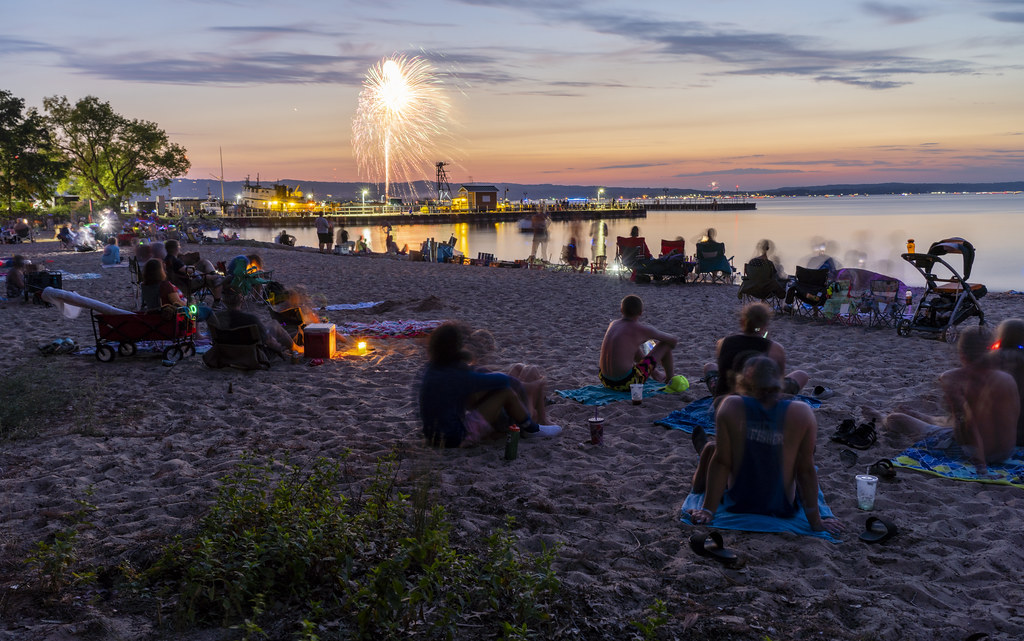 On a hike with my extended Decaseconds family to Laurel Falls, we paused by the flowing water to explore some strange arrangements of roots and rocks. Landscapes are so much more enticing to a human viewer when there are obviously human forms in the picture, they say, and this image definitely supports that thesis. 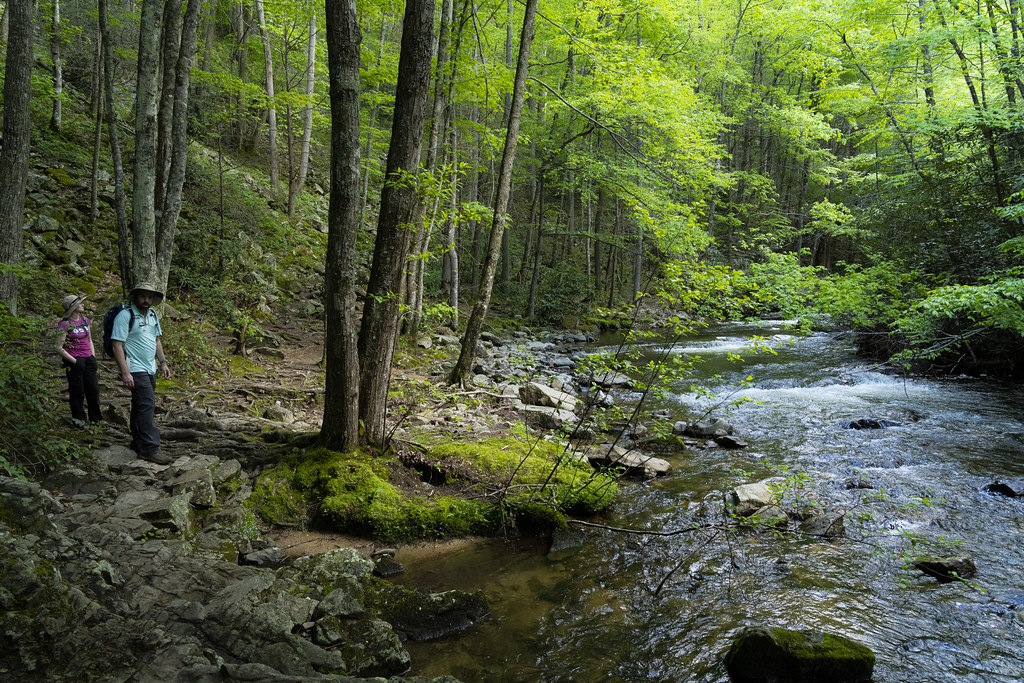 The start of August marked Pony Finals 2021 (and a partial re-do of the aborted Pony Finals 2020.) Unlike recent years in the Walnut Ring, this year’s Pony Finals was held in Kentucky Horse Park’s dramatic Rolex Arena—and I was there with media credentials for The Plaid Horse.

Getting the show up and running meant moving a lot of resources, like the stack of bedding here, around the Horse Park… But the result was occasionally some unfortunate traffic jams. 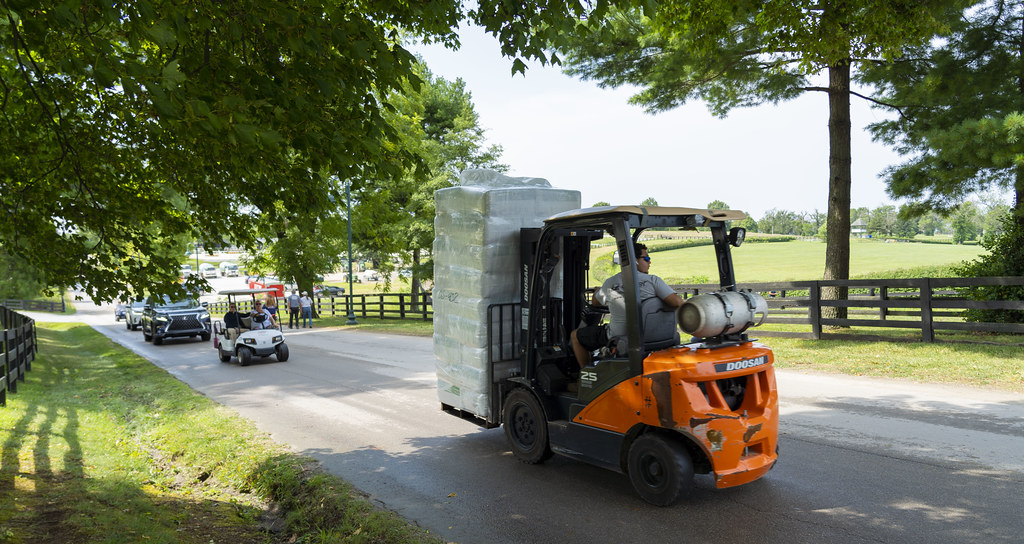 Rails for jumps, likewise, were stacked up and ready to go. 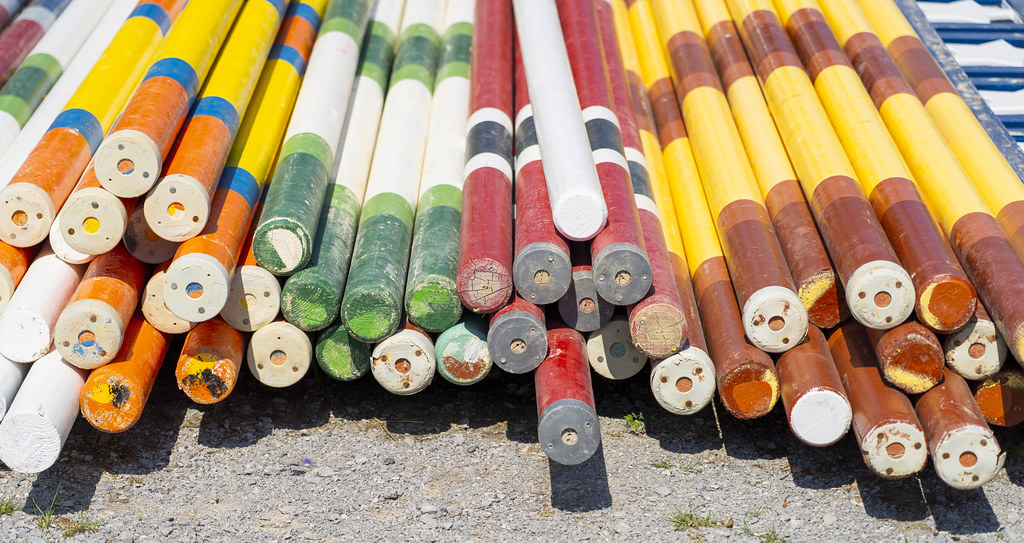 The pony model classes happened relatively early on in the competition. Though spectators crowded the rails, stewards monitored them carefully to prevent any coaching of the young competitors.

Carleton Brooks and Piper Klemm were among the spectators. 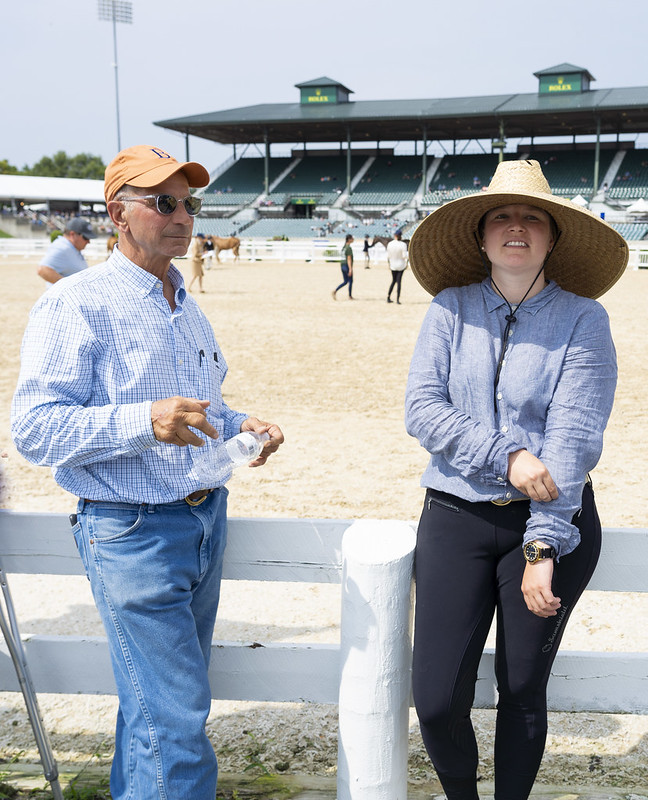 Achieving victory in the model has a lot to do with conformation. Front legs should be even with one another. 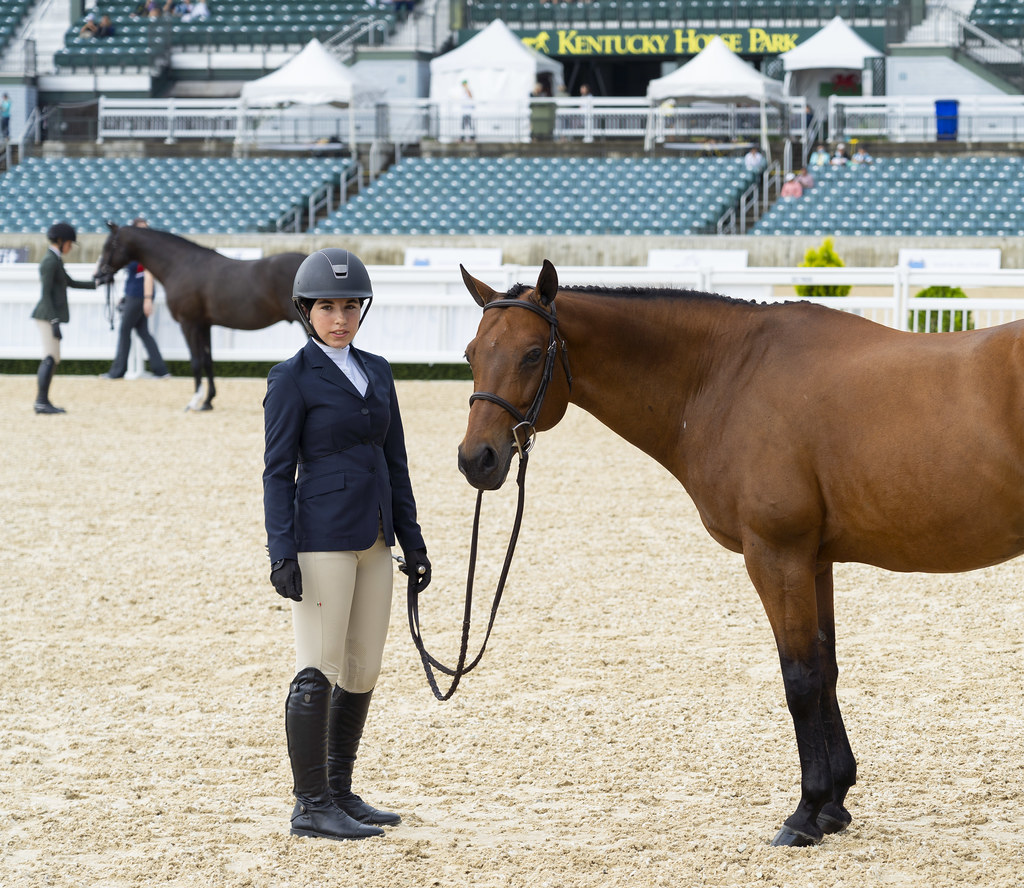 When the class ended, the competitors exited beneath the massive Rolex sign. 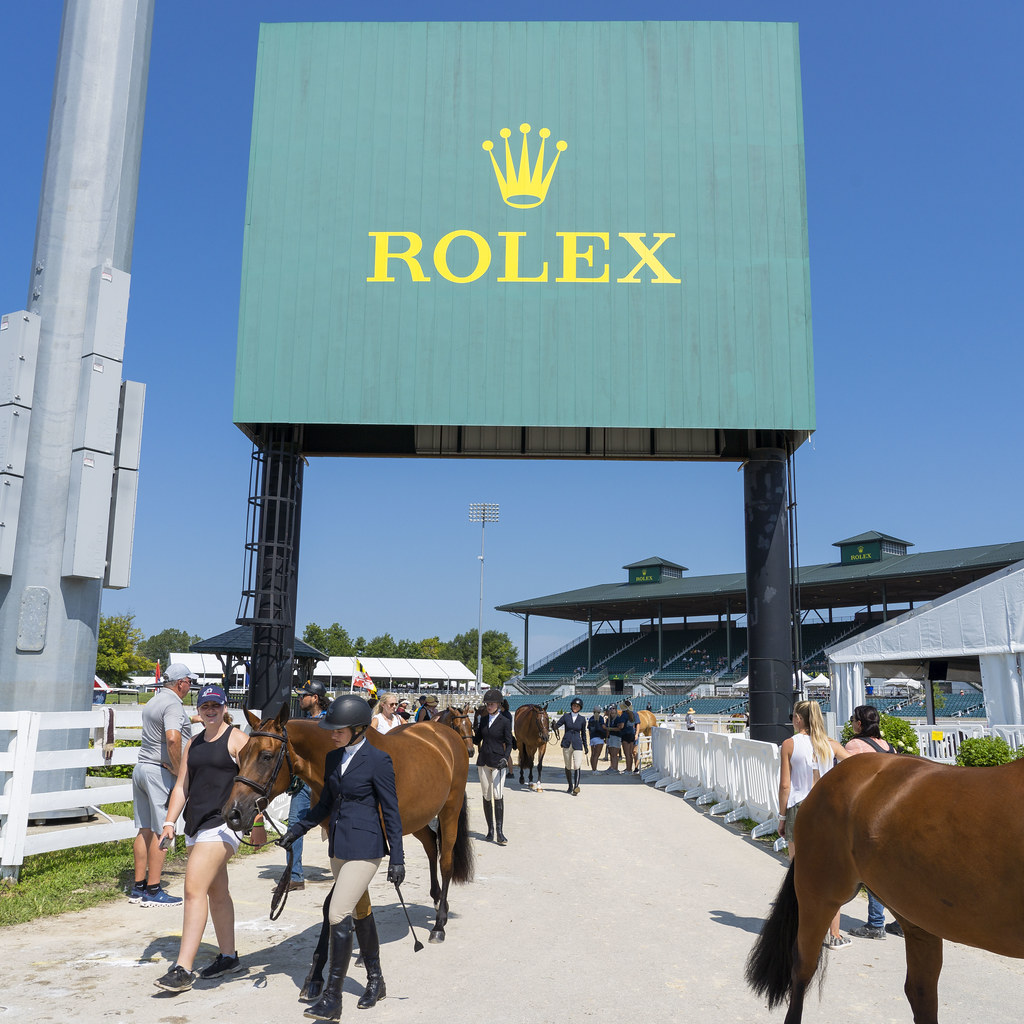 Just outside the Arena was an area for warm up and golf-cart parking. 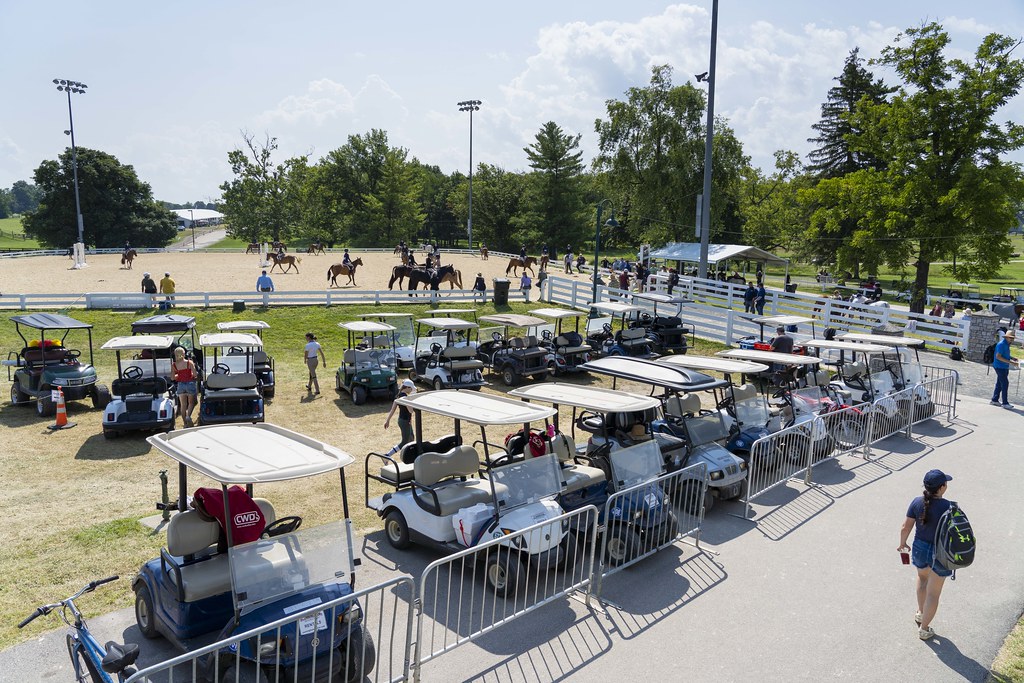 Riders stand at attention during an under saddle class. 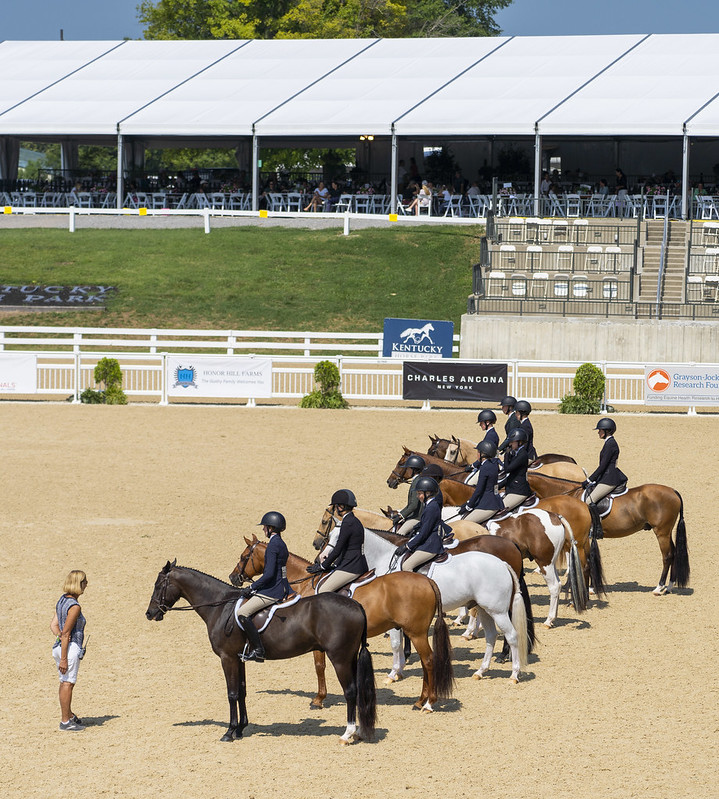 …Then exit the Arena in an orderly fashion when the class has ended. The pool of competitors in some divisions was so large that they were broken into multiple groups. 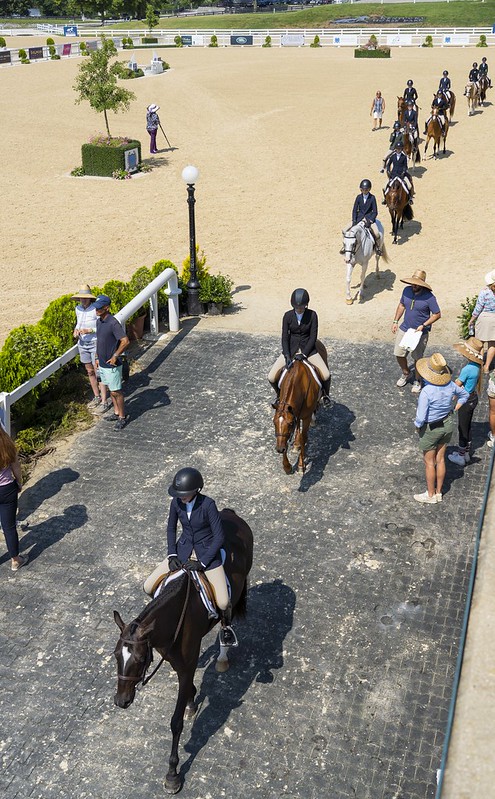 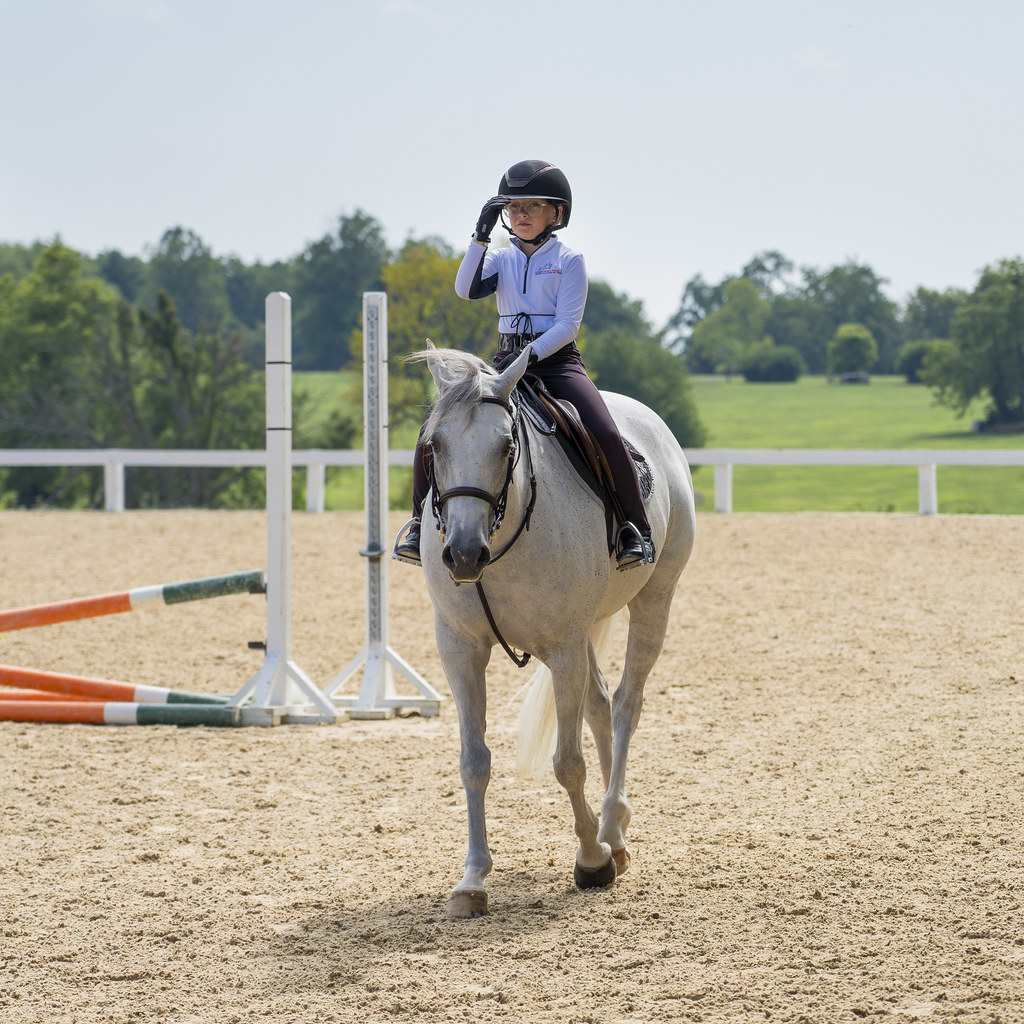 With horses and ponies involved in all kinds of activities, the Horse Park had a festival atmosphere. 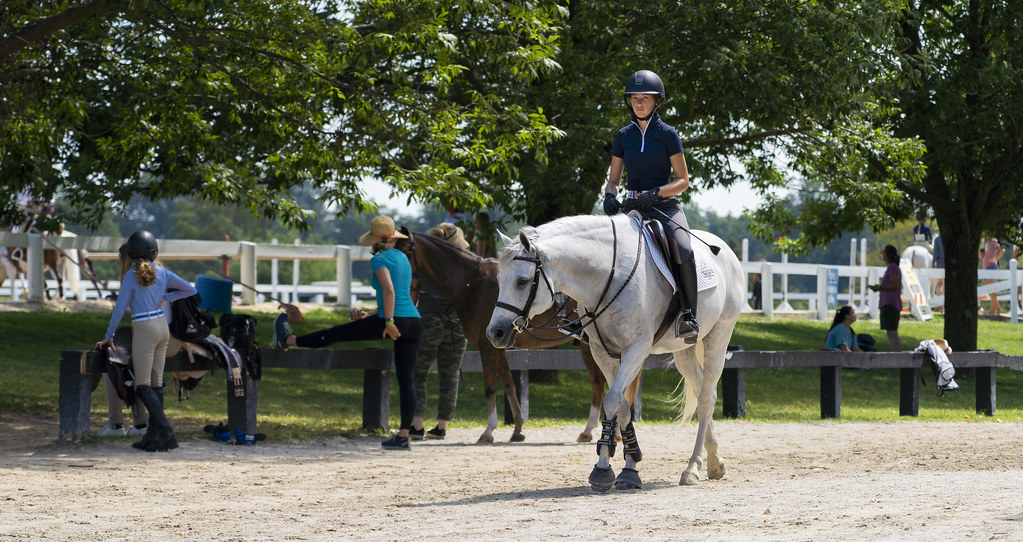 Small ponies look even smaller in front of big signage. 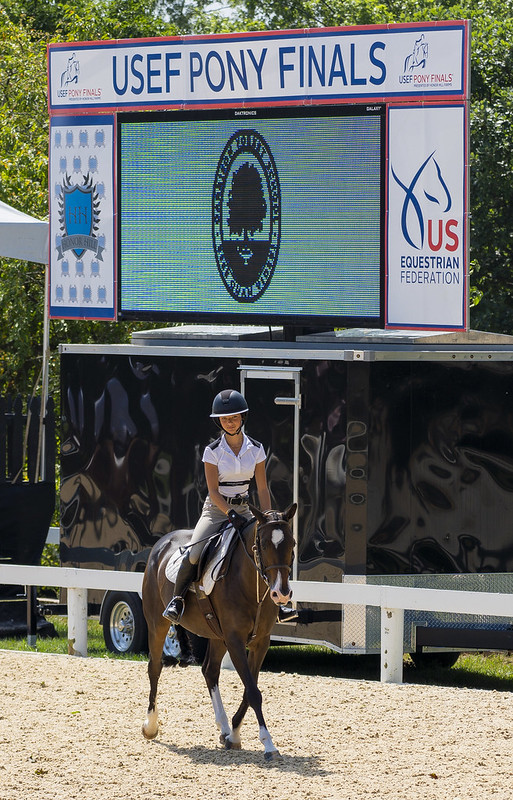 And the huge Rolex Arena looks even bigger with a small pony in it.

At the end of the day, though, this is ultimately about what pony and rider can do together in the ring. 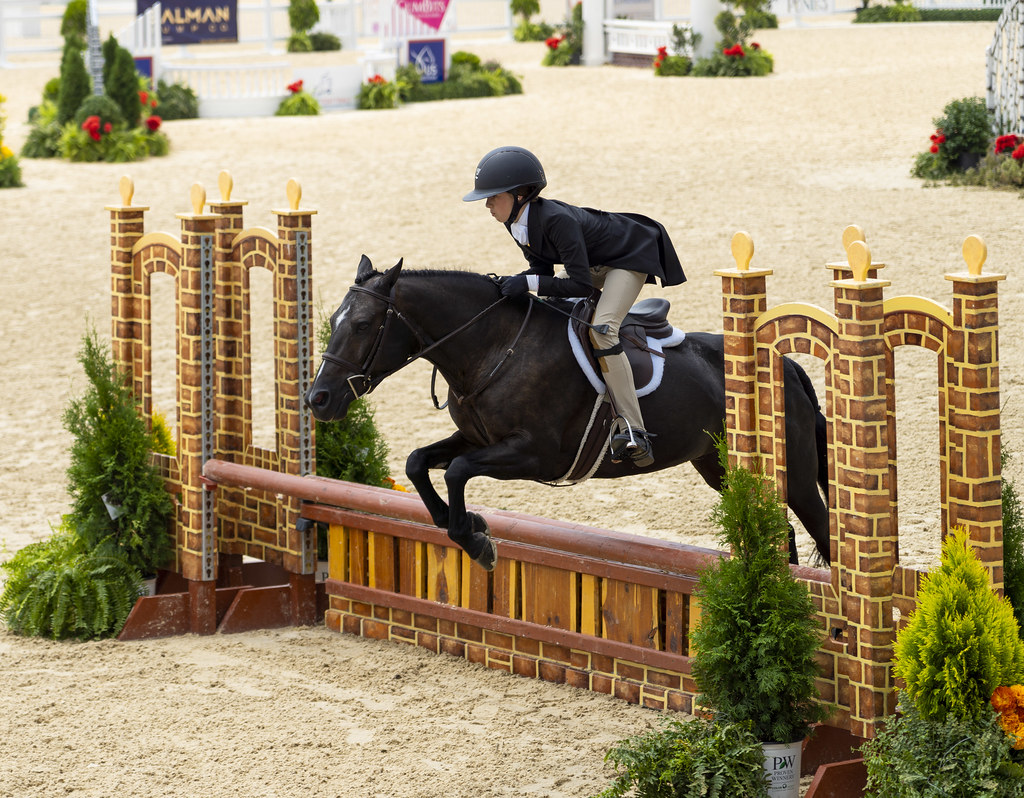 The list of what pony is in what class… While this board might be small at some shows, here most divisions number in the dozens. 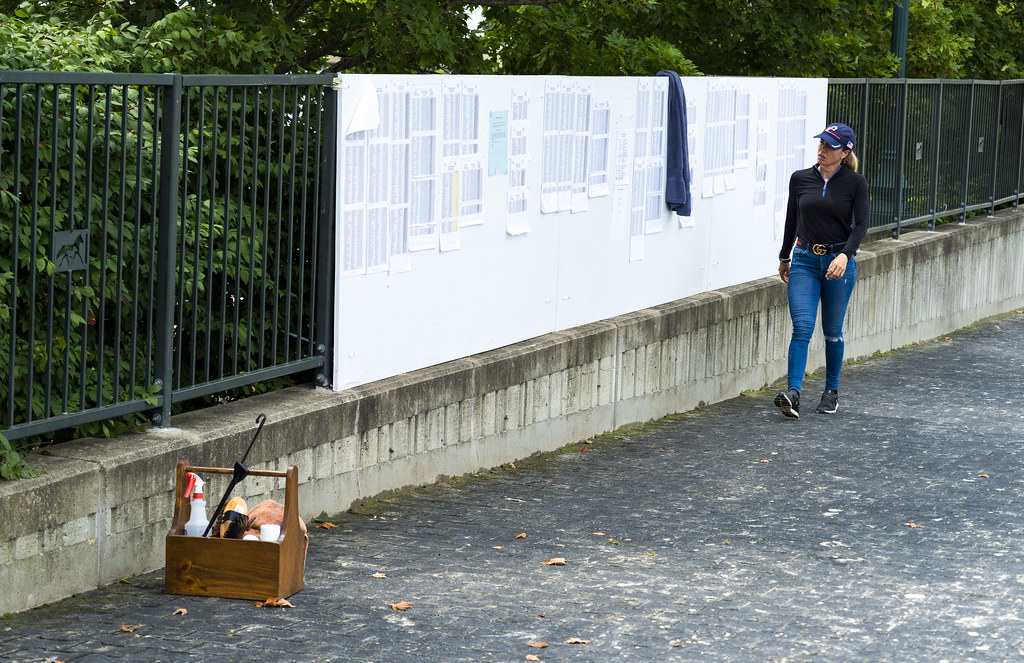 A bird’s eye view of the warm-up ring. 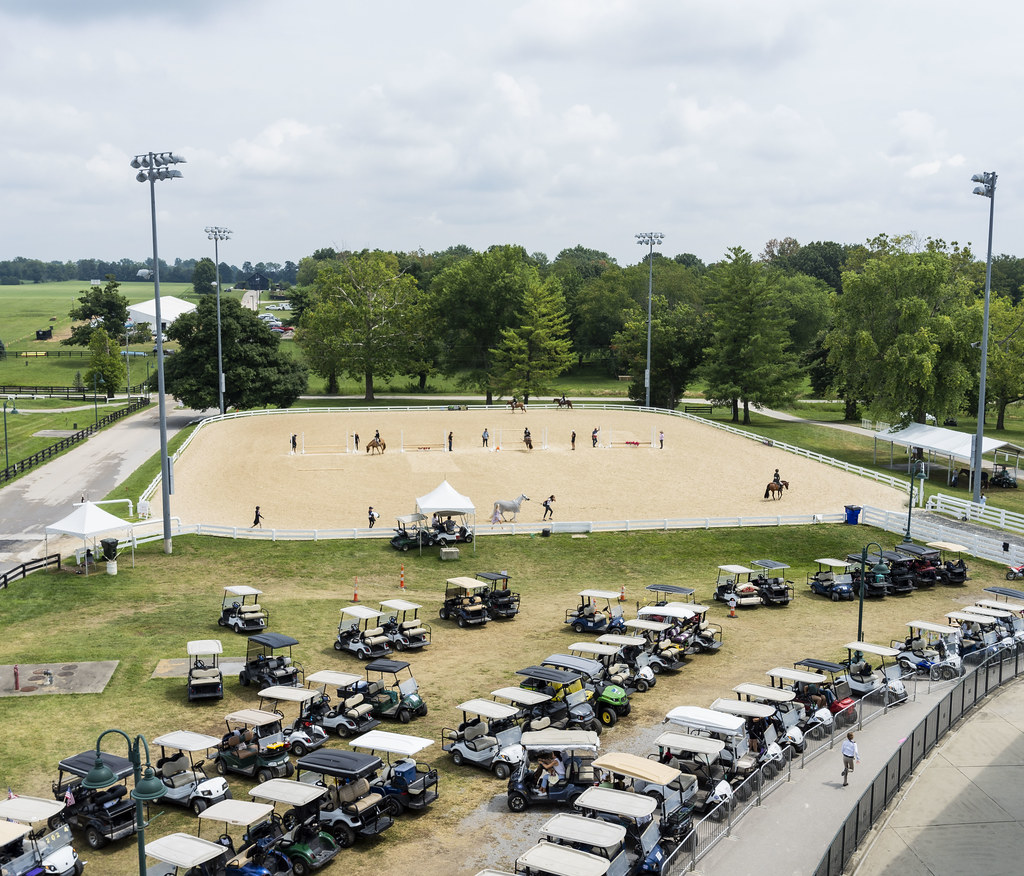 So many ponies are on the grounds that tents are used to supplement stall space. 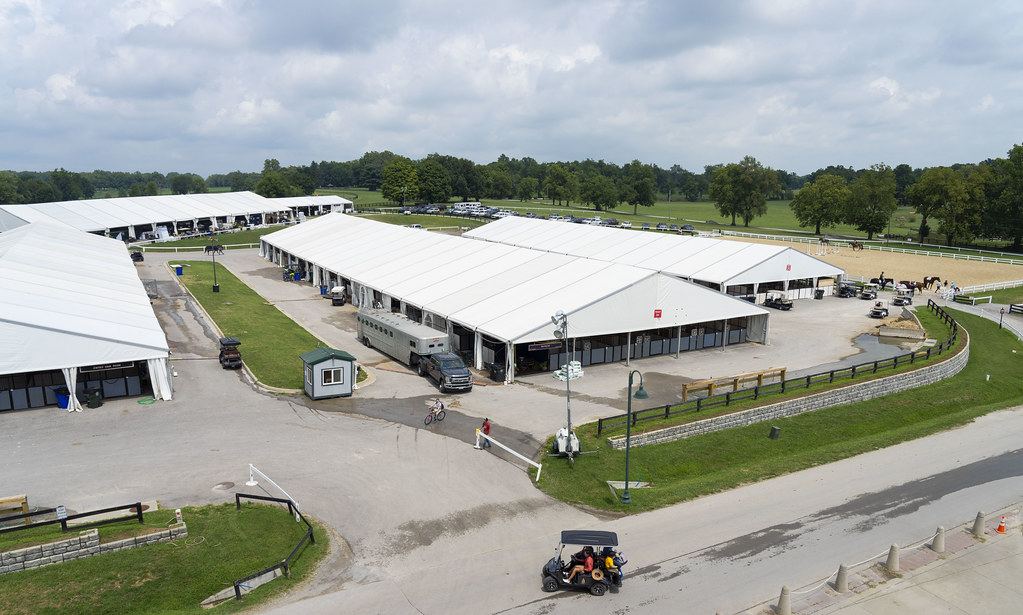 Bath time outside the tent. Drying off the pony after washing is important to prevent overheating on humid summer days. 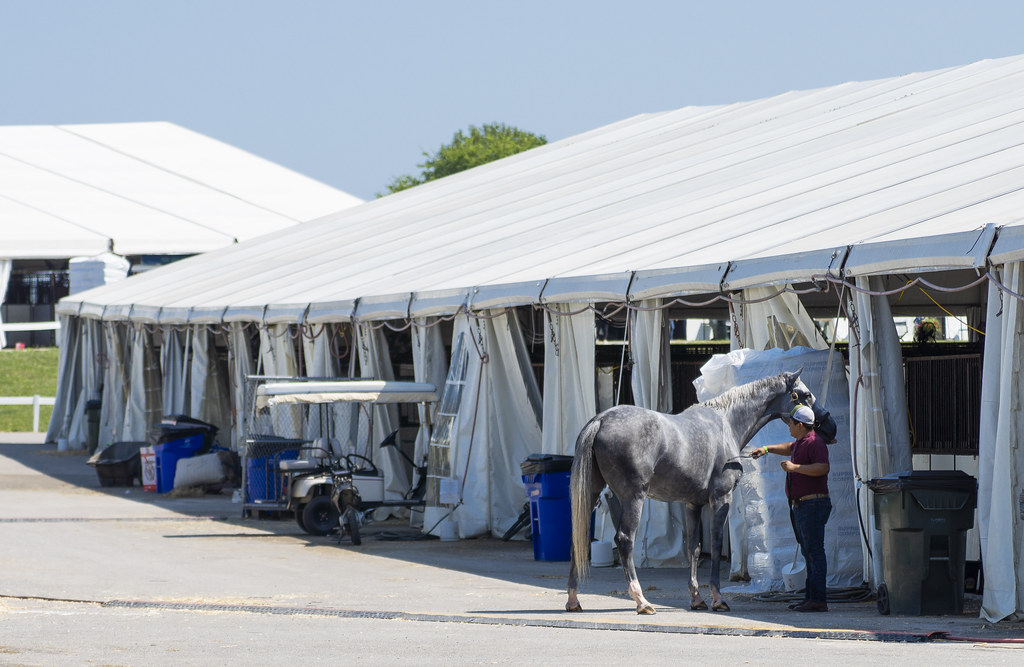 Back at the cottage, the trailer rests before another day as “pony taxi service”. 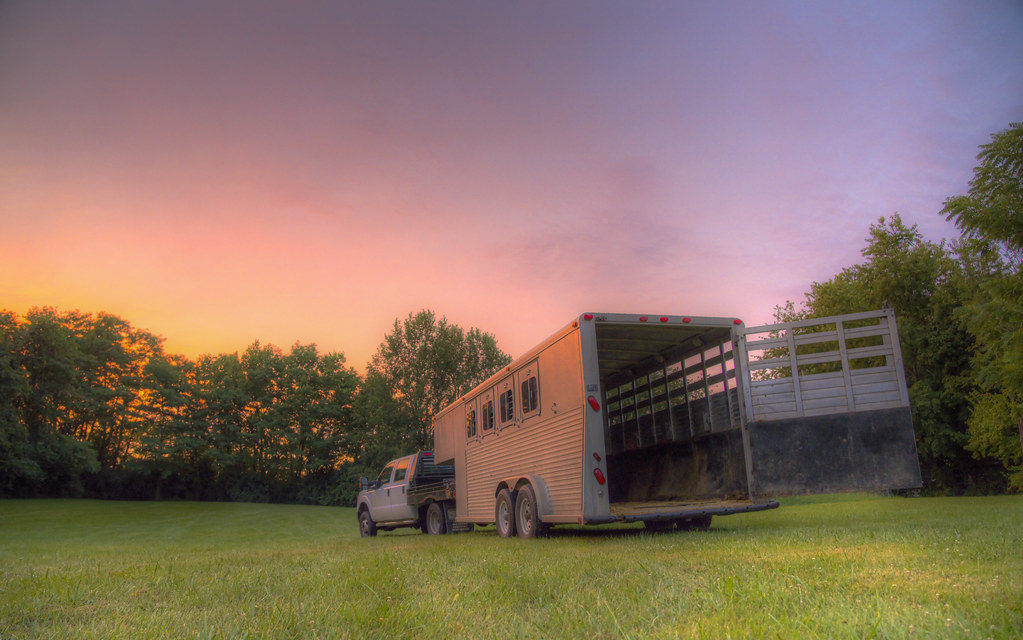 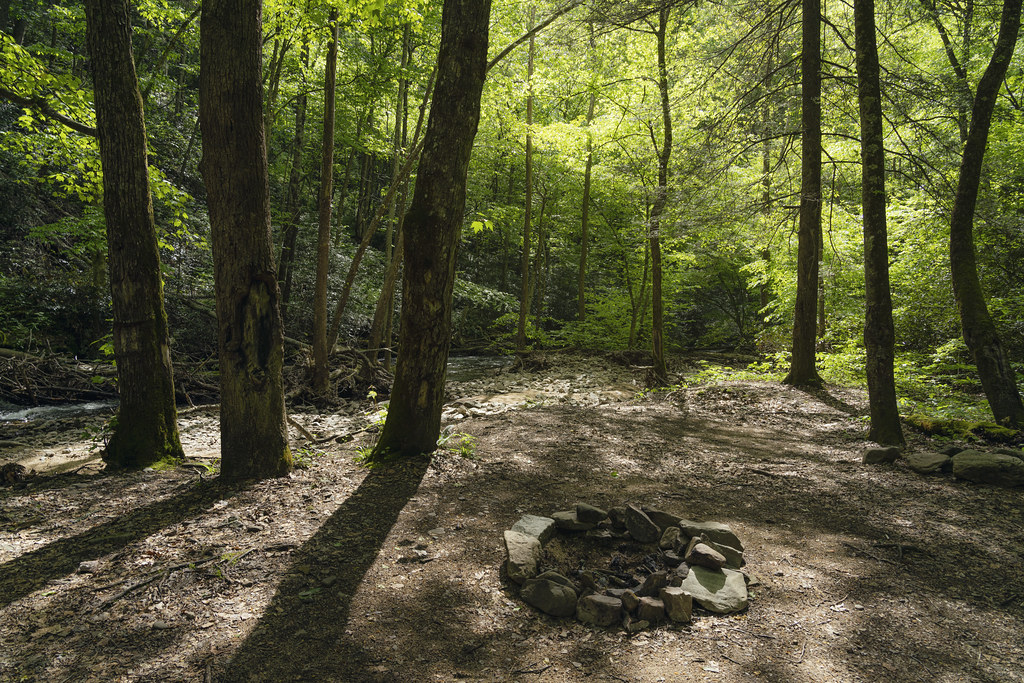 Childhood games of RollerCoaster Tycoon conditioned me to the experience of viewing theme parks from high above; passing Six Flags Great Adventure in a commercial airliner provided a remarkably similar vantage.

These two gray ponies chose to graze in a very satisfying mirrored geometry. 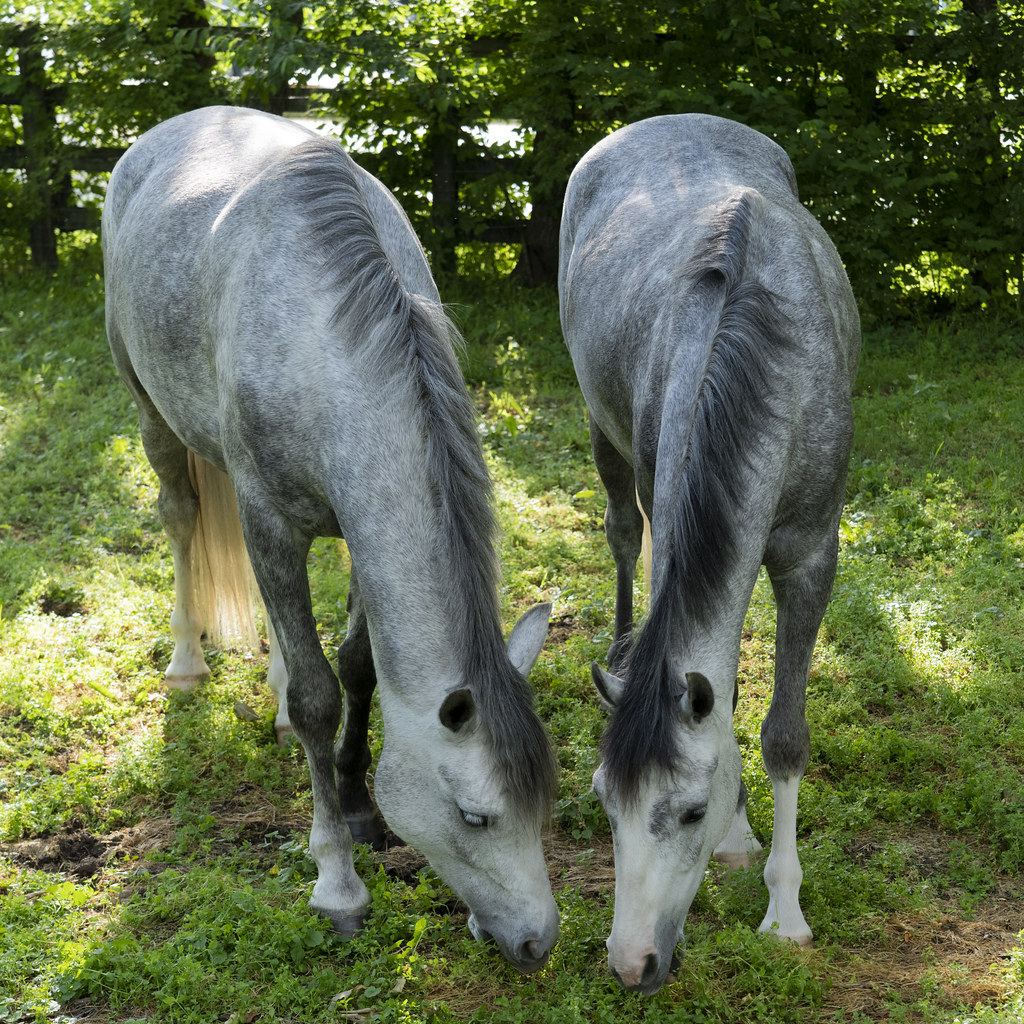 This image is another in a series of my re-processings of less-than-new RAW files with Photoshop’s “Super Resolution” machine learning algorithm. As in those other cases, the added impression of detail is particularly astonishing when viewed at full size after clicking through to the original image on Flickr. 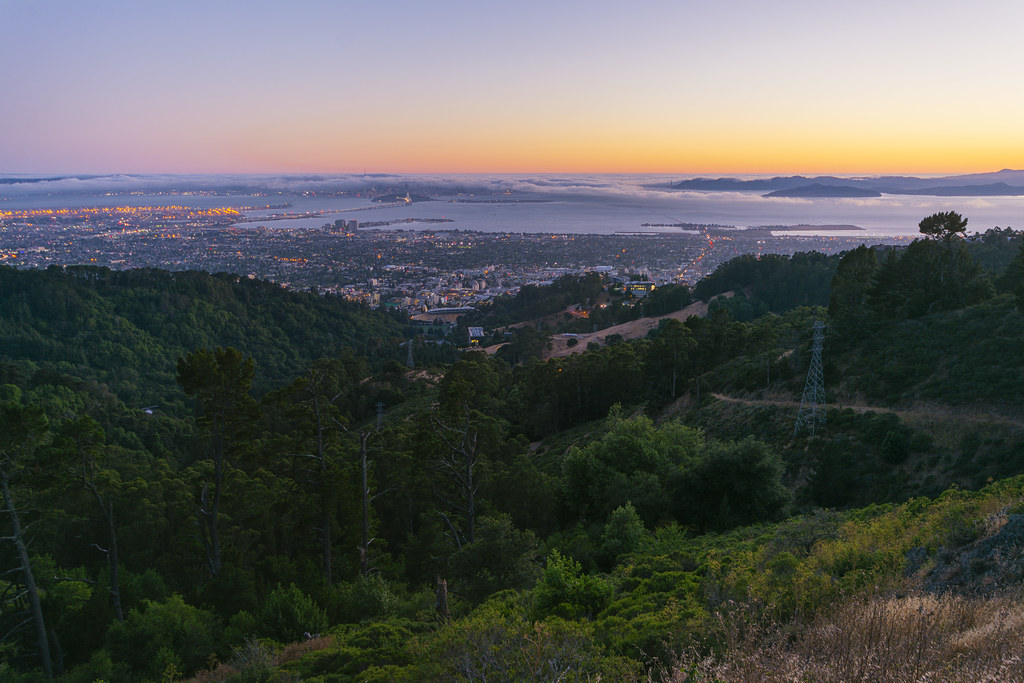