The view from atop Berkeley’s Campanile is a nostalgic one, with San Francisco and Oakland popping up in the distance above the sprawl. Walking along those broad, slightly cracked, and sun-baked pathways of Berkeley’s campus never quite felt natural, though. Can a place magnified beyond human scale feel that way? 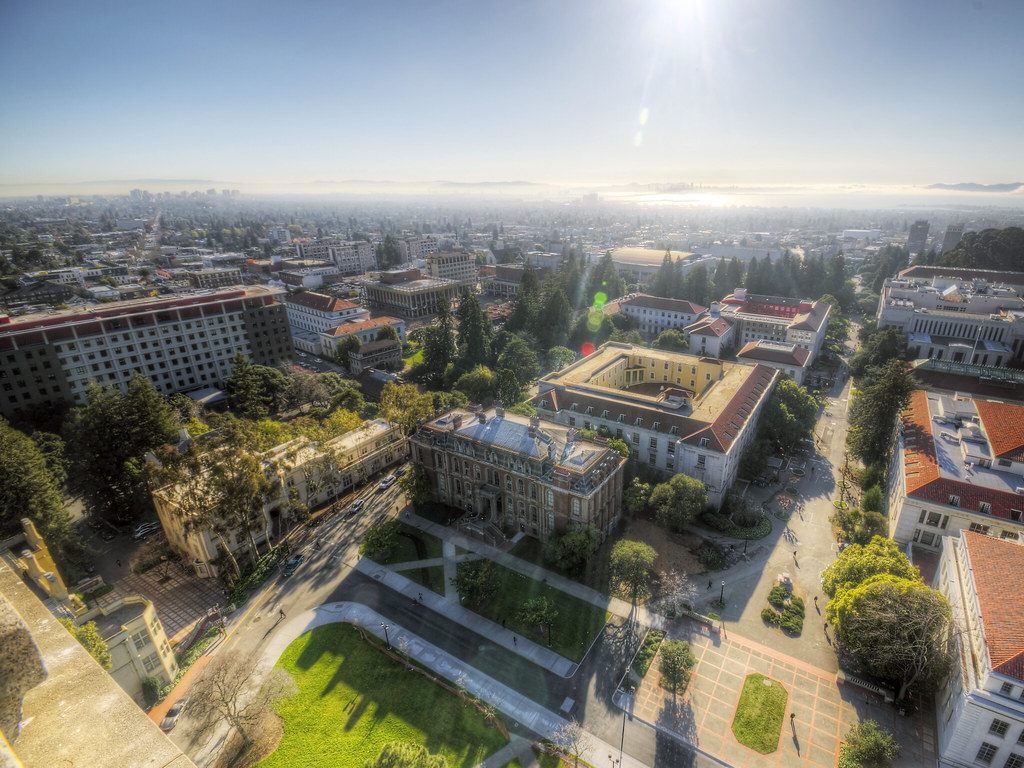 I’ve shown you the inside of the Energy Biosciences Building before, but I’m particularly happy with the way this shot captures the grandeur of all of this wood, steel, concrete, and glass. The sun casts the best shadows and refractory patterns through it all. (Well, maybe not THROUGH the concrete–but on it, anyway.)

When I’ve published photographs from UC Berkeley’s student machine shop in the past, I’ve tended to focus on the enormous, ancient, and immovable machine tools that dominate the shop. The tiny details at the edges, however, are the key to making everything function. Here we see the array of a Allen wrenches, tool bits, and cutting oil necessary to turn a chunk of steel into a precise part.

Today’s image is the result of a little experiment I did, in which I limited myself to shooting only with a simple prime lens. This is perhaps my favorite image that stemmed from the experience: Berkeley’s historic Lewis Hall on a rainy afternoon. The reflections from the wet concrete buildings, the grid of the plaza’s brick pattern, and the intricate array of the hall’s windows combine to produce such a strong sense of place. In contrast with these hard, angular, man-made structures are the curves of the redwood trees. Would the picture have been better, had I taken it with a wide-angle zoom lens? I’m really not sure.

Just around the corner from one of my favorite buildings, I found this spot where the curve of a footpath mirrors the curve of the passing road. The last moments of the day make for tiny beams of sunlight around my feet and tapping the tops of trees across the road. The start of summer is a perfect time in California.

Berkeley’s campus becomes oddly, frighteningly empty during the late spring. By the time summer rolls around, more students return to attend summer classes and the campus runs on a skeleton crew. In the time between the end of final exams and the start of the summer semester, however, only professors and graduate students dare to roam the halls. In this context, the enormous (but now mostly-empty) buildings remind me of the decaying palaces of some deposed monarch. School is dead! Long live school!

We’ve all seen desire paths before, but it wasn’t until recently that I knew their name. They occur in places where the constructed landscaping and walkways don’t reflect the routes people actually want to take. It might be a result of my background as an academic, but I’ve found them to be most ubiquitous at colleges and universities, where designers aren’t always cognizant of the hurry and crowding that results when thousands of students all attempt to change classes simultaneously. (I should probably be proud that a redesign of one of the quads at my alma mater is actually taking previously-developed desire paths into account in its new geometry.)

Today’s shot comes from outside the Valley Life Sciences Building at UC Berkeley; at each corner of the building, the name of one of the life sciences appears in the stonework. I didn’t plan it this way, but was happy to see that the “Psychology” corner was visible over the desire paths: the cause hovering over the effect.

(Or perhaps I should call it the Crushinator?) You may recognize today’s shot from Campbell Hall’s time as a mummy, but yesterday the reaper finally came for the building. I have to admit to my own exhilaration as I watched them slice and tear through the acres of rebar; of course, everyone in the crowd was watching through their cell phones as they snapped pictures. There’s something hypnotic in watching the end of something that seemed to permanent.

I’ve posted previously on the benefits of Berkeley’s gorgeous campus (and particularly the top of the Chemistry complex.) Today’s shot of Piper relaxing in the sun is perhaps the purest representation yet of how amazing a break can be. Any moment away from the lab bench is heaven when you have a view like this. (Or the right playlist.)

Though, like anyone else, some days at work turn out to be excellent while others are slogs to the finish, my morning walk to work is always a high point. I cross this little bridge over Strawberry Creek and stare up at the redwoods and inhale those great pine-y smells–much better than any cup of coffee!

At UC Berkeley, 4/20 is celebrated as a major holiday. At the appointed hour, students and staff gather on Memorial Glade. Today’s shot was taken about an hour later, as folks dispersed and things wound down. The amount of trash and litter left behind was a little sad; it felt like the end of a music festival.

Brendan and I don’t talk much about graduate school (in part because who wants to hear us complain?), but it still has a big impact on how we view the world. Long hours in windowless lab spaces make us really appreciate how amazing it is to feel the sun on your face.

There’s a particular balcony on the seventh floor of Tan Kah Kee Hall that has a clear and unrestricted view of nearly the entire San Francisco bay, and stepping out onto that balcony after spending all day down in lab can be utterly overwhelming. I think this picture really captures that feeling of the sun on my face at the end of a long, and the incredible relief that brings.

The environment changes so completely when it rains that I can’t help but run out with my camera in the moments between storms. Today’s photograph is another from UC Berkeley’s Strawberry Creek on a particularly drizzly day. The contrast between nature and the manicured stone walls works out quite nicely when everything is wet and glistening.

Today is a more unusual shot of UC Berkeley’s Hearst Memorial Mining Building. As with so many other buildings on campus, the terrain and topology of surrounding the building have changed radically since it’s initial construction, with each shift requiring an adaptation to the landscaping and lower structure of the building to maintain access without violating the original design too severely. In this case, however, a fairly functional combination of tunnel entrance and stairs looks uncannily like some sort of ancient tomb. I keep waiting for Indiana Jones to come sprinting out past the ash trays with an enormous boulder rolling close behind him.

This is the imposing Latimer Hall in UC Berkeley’s College of Chemistry. On this stormy afternoon, the sky and the bare tree and the building itself all took on this similar cast, but with such radically different textures and shapes. If you look carefully, the cracks and stains under each balcony level begin to resemble the geometry of the tree.